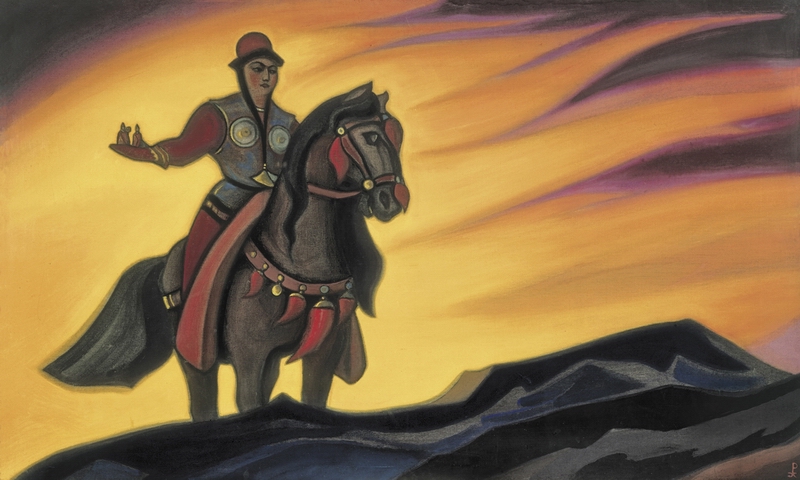 "Caring for the Common Good, caring for one's neighbor is the highest task!” [Letters of Helena Roerich in 9 Volumes - VIII. 36]

“The future of humanity, the future of the Cosmos – is there anything more sacred?” [New Era Community, 199]

“Divide everything into four shares: the first – for the Highest; second – for the Common Weal; third – for your fellow-man; and fourth – for yourself. But the hour comes when only three parts remain, for the fourth will be swallowed up by the second. Such divisions are called fiery. Nothing but the heart can indicate the boundary lines between them. But let the sequence be flamingly inscribed.” [Fiery World II, 457]

“Life must be filled with burning. At first man thought about himself, then about others, but afterwards his actions became useful for all that exists. He does not think any more about the usefulness, but he breathes it and gives life in Boundless Space.” [Fiery World II, 276]

“... Only in the purification and expansion of consciousness and in bringing our forces to the Common Good is the great purpose of a Man. Following this path, we truly reach the Crown of the God-Man at the appointed time.” [Letters of Helena Roerich in 9 Volumes - III. 40]

“He is a hero who acts self-sacrificingly, unwaveringly, consciously, and who, acting in the name of the Common Good, thus brings nearer the current of cosmic evolution.” [New Era Community, 147]

“Every step of truth is directed toward the common good – this is the defining criterion.” [Supermundane, 509]

“How to affirm the measure of your deeds?

If your deeds are useful to the world, then is their measure great.

How to affirm the quality of your deeds?

If your deeds benefit humanity, then is their essence good.” [Leaves of Morya’s Garden I, 410]

“Nations should learn to think about the Common Good, for self-interest will prove to be a major obstacle to progress.” [Supermundane, 731]

“But if one’s spirit is so advanced that he can perform many things and utilize any of his energies in a natural way and for the purpose of the Common Good, then this is no longer sorcery, but a great achievement, a great labor for humanity.” [Shambhala by Nicholas Roerich]

“Striving for the Common Good opens the Gates of Service. …Many people dream of the Common Good and are even ready to serve it, as long as it does not violate their habits and well-being. But Service to the Common Good first of all requires sacrifice and complete contempt for everything personal, complete forgetfulness of self. For when consciousness expands, when all sensitive, subtle understandings wake up, then the law of sacrifice will be accepted as the highest achievement. And there will be no place for self-pity, or fear for the future, or resentment, or envy, for in every breath we will recognize the greatness and beauty of Service.” [Letters of Helena Roerich in 9 Volumes - I. 76]

“If the personal were put ahead of the Common Good by those who moved and are moving evolution, the world would fall into savagery and into the darkness of complete ignorance. Culture, science and philosophy were moved by them, the figures of the Common Good, who fearlessly accepted the cup of Service and paid with their sufferings, and often with their lives, for the right of mankind to ascend to new levels of knowledge. ... Now the age of universal cooperation is coming, when the narrowly personal is sacrificed to the broad Common Cause, the Cause of the transformation of all mankind.” [Facets of Agni Yoga 1955, 534]

“Can one perform only useful actions in earthly life? Of course one can. It is easy to imagine an entire life as a continuous stream of usefulness to others.” [Fiery World I, 508]

“Egoistic work may seem successful at first, but its end is a foregone conclusion,  since the line of such aspiration bends back to its originator. The line of striving for the common good is carried away into infinity, and its results are boundless”. [Еxcerpts by Boris Abramov from the book "Aspiring Heart" 1955, 330]

“Everything personal is short-lived and ends with the individual. But the Common Good and its fruits do not die. And therefore the Chalice of the Common Good is a symbol of immortality” [Facets of Agni Yoga 1955, 605]

“Personal, narrow-minded measures should be left. The personal has the right to exist only when it is merged with the phenomenon of the Common Good and forms its harmonious integral part, like a rose petal - the beauty of a whole bouquet.” [Facets of Agni Yoga 1953, 109]

“The Common Good can serve as an idea acceptable to all. When it is firmly established in the hearts of people and implemented, then the personal good of everyone can be easily realized, but not the other way around.” [Facets of Agni Yoga 1954, 652]

“The Thinker was concerned about every thought, knowing that the purpose of each thought is to serve the Common Good. He said, “When people understand the meaning of the Common Good, happiness will be theirs.” [Supermundane, 264]

“Let everything be done for the Good. Let every action lead to a new achievement.” [Heart, 211]

“Thought and work directed to the Common Good will be a strong weapon against evil.” [Brotherhood, 578]

“…lofty knowledge and true service for the Common Good create the foundations for the health of the spirit.” [Supermundane, 525]

From “Drops” by Natalia D. Spirina:

“May all go well with the world!”

And in it we will find a drop of happiness.

We are involved in the whole universe.

And for the bright age to come,

We repeat in the days of bad weather:

“May all go well with the world!”