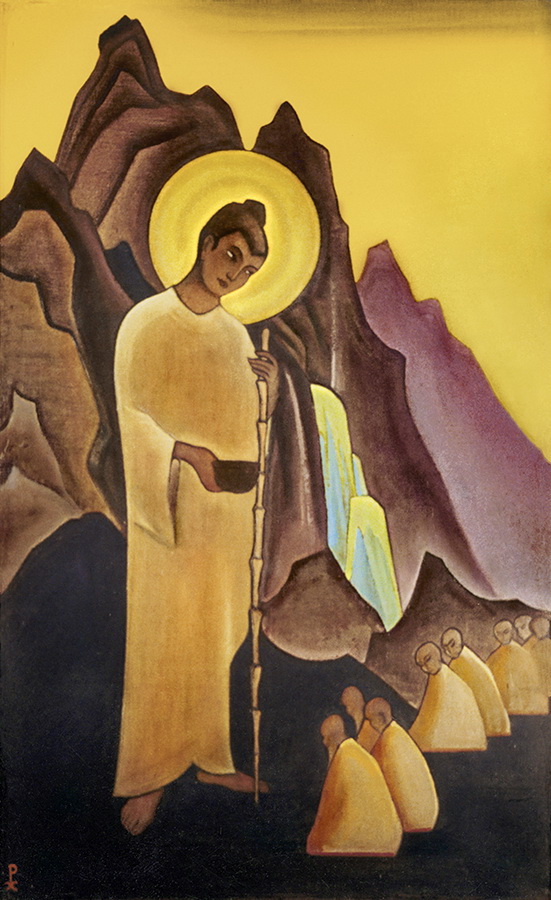 “In its essence, the heart is an organ of higher action and giving; that is why every act of giving partakes of the nature of the heart. Every positive Teaching enjoins giving. Such an affirmation is truly practical, for without giving, the heart does not endure. Naturally, one has to understand giving in all its justice. Giving should not be understood as just contributing money or donating objects one no longer needs. True giving is of the spirit. Let every heart pour forth streams of spiritual gifts. Not without cause is it said that every beat of the heart is a smile, a tear, and gold. All life flows through the heart. The seeker should be able to give constant work to the heart. Nothing can refine the heart so perfectly as limitless spiritual giving. Usually spiritual giving is not valued, since anything invisible goes unappreciated. But the source of wealth, whether spiritual or material, is the heart.” [Heart, 386]

“To give is a divine attribute. The inexhaustibility of giving is found in varying degrees in all of nature. But fire is the element in which giving is most apparent. The very principle of Fire is transmutation and constant giving. Fire cannot exist without the sacrifice of giving; likewise the fiery seed of the spirit exists through giving. But the sacrifice is a true one only when it has become the very nature of a man. A mental and compulsive sacrifice is neither natural nor divine. Only when sacrifice becomes an inalienable attribute of life does it become inseparable from the consciousness. Thus, by its qualities Fire teaches us during ascent. Let each one who wishes to attain cognizance say to himself, “I will be like Agni.” One must grow to love fiery sacrifice as the closest means of communion with the Fiery World. Without this self-sacrificial striving it is not easy to rise above the claws of evil. Like Fire, which is elusive, the consciousness becomes mobile when united with Agni. One must approach sacrifice not by the path of despondency but by that of fiery splendor.” [Fiery World I, 546]

“Giving is a fundamental principle of the fiery divinity of the spirit. The analogy with fire is striking in all stages of development. From the crudest forms of life up to the highest, giving is manifest. One should not protest if a savage, not cognizant of the value of spiritual gifts, offers his deity his household treasures. By such circuitous paths, humanity attains the highest giving. Beings of lofty degree understand giving as a joyful duty. One should strive for this degree of fieriness, for then we enter into balance with the Fiery Principle, and giving becomes receiving. Then, already devoid of selfhood, one’s being accepts the highest gifts. And in such accelerated exchange an inflow of energy takes place. This constant regeneration renews the consciousness and spares one the breaks in consciousness during the transition into the Subtle World. Thus one can remember the exchange of substances in both the lowest and the highest. The unceasing interchange erases the boundaries between the lowest and highest, in other words, it raises the general level. Such work will benefit one’s near ones, because it draws them into the orbit of striving of consciousness.” [Fiery World I, 626]

“Only giving in whatever form can justify life and give meaning to life. People suffocate from a meaningless existence if they cannot give, although they often do not understand the reason. But the spirit senses the spatial absurdity and nonsense of egoistic vegetative existence and suffocates in it. The goal of life is to give, and not because the one who has anything also must give, but because the giver destroys the fence of selfhood, goes beyond it and includes the sphere of consciousness of others in the circle of his consciousness and thereby expands his own.” [Facets of Agni Yoga 1960, 359]

“Giving, creativity and love are the triad of building a heart and building a world.” [Facets of Agni Yoga 1951, 96]

“The desire to share your knowledge, your art, the desire to please a person and help him understand the beauty of life is service. If it is possible to enter into the position of a person and open up new horizons for him, then, verily, this will be the best service.” [Letters of Helena Roerich in 9 Volumes - VIII. 36]

“…heart energy is multiplied precisely in thoughts. The collecting of the most precious is only for the purpose of returning it. Who, indeed, would not wish to give something of the best quality? Only a cheat will try to offer something unfit or useless. One must keep watch over one’s thoughts, in order to send those of the best quality.” [Fiery World II, 240]

“In this glorious Seven we have great educators, great messengers, great peace-makers, great builders, great arbiters, and they evoked the same earthly path. …They knew the Eternal Law that only in giving we receive.” [Realm of Light by Nicholas Roerich]

“Giving always means receiving. Receiving and giving are opposite poles of a single thing, poles of one and the same phenomenon.” [Facets of Agni Yoga 1961, 529]

“The wise man rejoices when he is given the opportunity to pay off old debts, the stupid one rejoices at every receipt and wants to get even more, as much as possible, forgetting that nothing is given for free.” [Facets of Agni Yoga 1969, 699]

“He who knows the happiness of bestowal will receive without measure, but he who finds happiness only in receiving will lose it.” [Еxcerpts by Boris Abramov from the book "Aspiring Heart" 1953, 220]

“In measuring the right amount to give, the proper standard is that of love and responsibility. To give too little is contrary to love, but it is no better to give too much. Stinginess is unworthy, but generosity that even leads to betrayal is not in harmony with one’s goal. Just as insufficient food leads to starvation, excessive intake leads to poisoning. It can be stated without exaggeration that the number of betrayals has increased considerably due to excessive giving. A Teacher who gives and trusts must pay attention to a multitude of conditions. He must take into consideration not only the individual worthiness of the one who receives but also the qualities of the environment and people around that person, not to mention karmic and astrological conditions. The sensitized heart whispers how one can come to understand this complex current of conditions.” [Heart, 573]

“The joy of giving is the greatest joy, and therefore it is necessary to guard this gift in oneself so carefully and not squander it without benefit ... Remember the great commensurability, without it one can neither grow nor build.” [Letters of Helena Roerich in 9 Volumes - IX, 104]

“True giving, which does not mean oneself, but the recipient, is first of all commensurate. It is always produced according to the consciousness of the recipient. ... Human consciousness is a fragile vessel that requires a very careful attitude.” [Facets of Agni Yoga 1961, 529]